Activity in 2012 looks good, but not when compared to inventory

Activity in the industrial real estate market has remained fairly high and stable since 2009.  The fourth quarter of 2012 showed activity at 10.2 million square feet, ending the year with a total of 45.8 million square feet of activity.  This high level of activity in the last quarter is pretty surprising because, as Sim Doughtie states in our most recent Point of View, “typically industrial activity decreases 20 to 30 percent during a quarter when national elections are held.”  The reason the industrial market did not seem to follow the trend this time is probably because many industrial building owners decided to sell property before the end of the year to avoid an increased capital gains rate in 2013.


Although the high level of industrial activity over the last few years sounds great and seems like it means good things, when compared with inventory levels for the same time period, we have to realize that the market probably isn’t improving for us as much as we hoped.


The top graph in the slide shown below shows the square footage of deals signed each year.  These figures have stayed fairly high even throughout economic downturns.  The bottom graph shows these same figures for square footage, but compared to the entire industrial real estate market.  Activity, when compared to inventory, has been very low for the last several years.


Competition in today’s market is much higher than in previous times.  King Industrial currently tracks over 660 million square feet of industrial and service space in Metro Atlanta.  As the total square footage of transactions remains fairly stable, the total industrial inventory base continues to grow.   This means that activity, as a percent of total market inventory, continues to decrease.  Charlie King sums it up well as he says, “we are in a much more competitive market with more empty space, but chasing the same number of deals.” 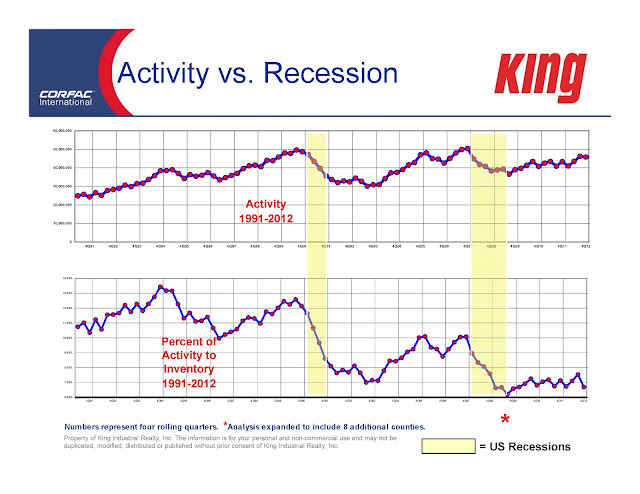 New construction up from last two years, but does this mean anything?

Although in 2012, there was a slight increase in the amount of spec construction due to IDI, we still seem to be following the same general trend of mostly build-to-suit construction for the past few years.  Since 2009, the vast majority of new construction has been build-to-suit mainly for two reasons.  First, our excessive inventory of available space keeps prices down by enough that new construction has a very hard time competing with the prices of used space.  Second, there are many older, big-box buildings that have low ceilings and not enough trailer parking.  The majority of the build-to-suit construction winds up being the consolidation of several different buildings or relocation from an old facility to a new facility that can better accommodate the needs of current users.

Build-to-suit construction can make activity appear to be improving, but we have seen that this does not usually translate to a notable impact in net absorption.  According to Charlie King, “this is because most of the companies involved in the build-to-suits are already located in and usually give up just as much or even more space than they occupy in a new construction.  This leads to very little net absorption and more functionally obsolete buildings on the market.”

From a developer’s perspective, things are definitely not great.  The market still has a great deal of space that needs to be absorbed and owners of older buildings are faced with a problem because these spaces are proving difficult to lease.  We are still a long way from seeing the same level of new construction that took place in 2005, but maybe it is best if we don’t reach such a high level again and avoid such a huge crash in the market over the next cycle. 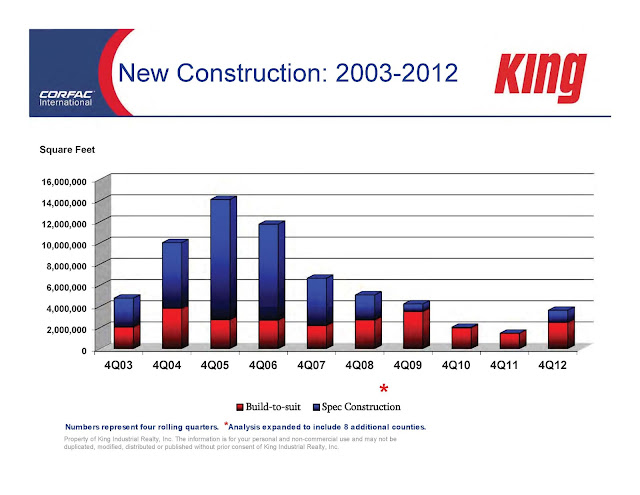 I think it’s safe to say that most people are trying not to get their hopes too high about the full recovery of the real estate market, or even the overall economy.  However, it’s hard not to be pleased after hearing that in the 4th quarter of 2012 the Metro Atlanta industrial real estate market showed the highest amount of net absorption so far since 2007.


Total activity in the 4th quarter of 2012 was 45,828,684 square feet, which compares fairly well to the record high of 50,437,996 square feet of activity in the 4th quarter of 2007.  The last few quarters have definitely shown improvement for the Atlanta industrial real estate market.  Hopefully the next few months will bring more positive figures and good news to report! 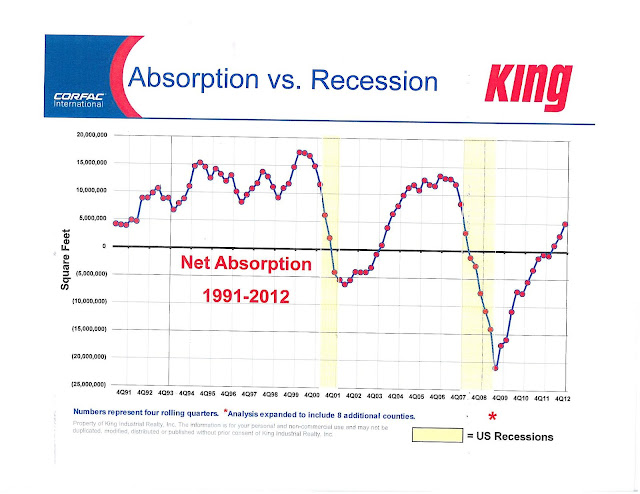